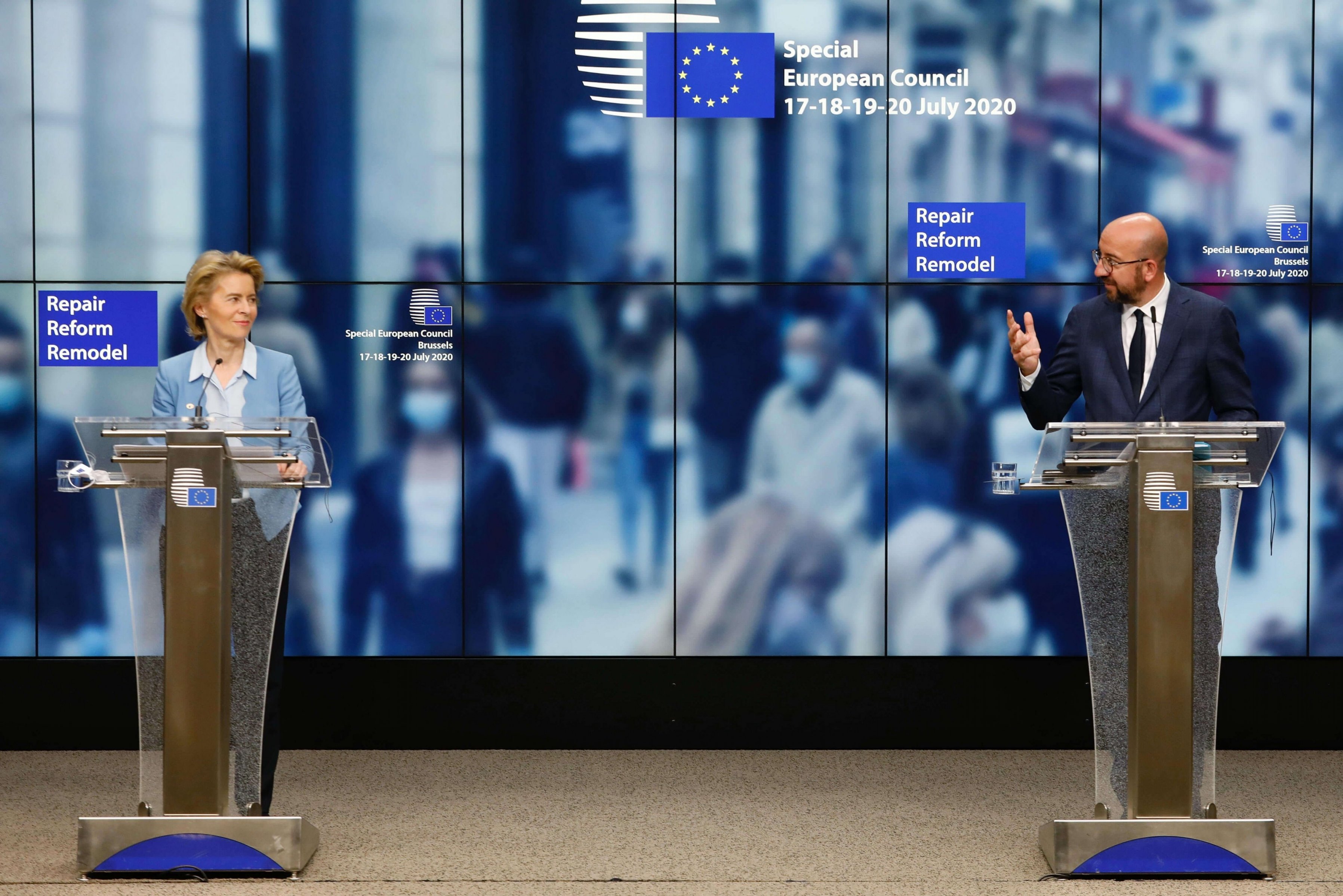 Summit mythology: What did EU leaders decide on rule of law conditionality?

On 21 July, EU leaders reached a decision on the bloc’s economic response to the covid-19 pandemic and the Union’s multi-year budget. Several narratives have emerged since that day, many of them contradictory. This is especially true when it comes to rule of law conditionality.

Rule of law conditionality creates a link between the distribution of EU funds and respect for the rule of law by EU member states. Only countries that uphold the rule of law adequately would be entitled to EU money.

DRI’s Michael Meyer-Resende and Jakub Jaraczewski go beyond the headlines to explain what the agreement actually means for rule of law conditionality.

Do EU member states have any veto power over the next steps on conditionality?

However, this sentence is a standard formula to indicate that there remains high interest in an issue. It does not imply anything beyond what it says. The European Council will discuss the issue, probably at its next meeting scheduled for 15-16 October, although there are reports of an extraordinary summit on 24-25 September.

The text on conditionality will be turned into legislation according to the EU’s law-making process, during which member states are represented in the Council of the European Union, also known as the Council of Ministers. However, there is no veto power for member states on this type of question.

There is, however, one more veto option for member states: National parliaments have to approve the MFF and recovery budget[1] proposed by the European Commission. Only if all approve can the proposal be adopted. Language on rule of law conditionality is not part of this proposal. Yet the Hungarian government, for example, could try to use this power as leverage to get more concessions, as it tries to get as much funding with as little rule of law oversight as possible. On the other hand, the Hungarian parliament may hesitate to single-handedly block the EU’s entire funding arrangements on which Hungary relies much more than most member states. Also, it would be hard for Prime Minister Orban to explain to the Hungarian public why there was a problem when he had declared victory after the European Council meeting.

What will the Commission do next about conditionality in response to the Council conclusions?

There is some debate about what the Commission’s next steps are supposed to be. Those who oppose conditionality may argue that the Commission needs to start from scratch, simply because they want to delay the legislative process. However, Germany – who holds the current EU presidency – announced straight after the meeting that the European Council should now work on the 2018 Commission proposal on conditionality that had already passed the first reading in the European Parliament. As the EU presidency is in charge of scheduling items, it is to be expected that the 2018 proposal will be discussed and voted on.

What do the European Council conclusions tell us about voting procedures in the Council of Ministers on rule of law conditionality?

One of the more enigmatic sentences of the conclusions reads: “In this context, the Commission will propose measures in case of breaches for adoption by the Council by qualified majority.” Some analysts suggested that this passus could mean that the Council of Ministers would vote by qualified majority on a new instrument, such as the Commission’s 2018 regulation. However, EU law-making follows the process laid out in the EU Treaties and related legislation. The European Council cannot change these requirements in its conclusions, which are only political guidance. The 2018 regulation or similar instruments follow the 'ordinary legislative procedure',[2] which indeed foresees a decision by qualified majority at the end.

What is the Council conclusion about then? It cannot be meant to indicate how the regulation is adopted, but it could be meant to highlight what kind of majority requirements should be included in the regulation for cases in which a suspension of funds would be decided. Ever since the Commission adopted the 2018 legislative proposal, the debate has focused on the involvement of the Council in a conditionality process. In the 2018 proposal, it is stated that the Commission could propose suspension of EU funding in case of general rule of law deficiencies and the Council could only reverse this decision with a qualified majority. In other words, only a majority of member states (in terms of population and votes)[3] could stop such a process – a high bar to attain. Before the meeting, European Council President Charles Michel had suggested to change that requirement to a qualified majority needing to vote in favour of such an action, making it much harder to get a financial suspension adopted. The Council conclusions may have referred to that discussion, although the language is nebulous.

Is the EU rejection of twinning funds for towns with “LGTB-free zones” in Poland an indication of what is to come?

Following the establishment of so-called “LGBT-free zones” in Poland, the European Commission announced that it has rejected applications for funding town twinnings involving six Polish towns that have introduced such zones. This move is seen as the first strong reaction of the EU to increasingly anti-LGBT policies in Poland. It could be an indication of more political will to respond to violations of EU values with financial consequences.

The Polish Minister of Justice claimed that it is the first step to link farm subsidies to the introduction of gay marriage. However, neither the EU nor the European Convention on Human Rights have a position on gay marriage. It is left to member states to decide on that, while having some discretion for identifying alternative means of recognition of same-sex relationships.

Everybody discussed the enigmatic rule of law conclusions. Are we overlooking other developments?

1) John Morijn from the University of Groningen pointed out that the European Council conclusions provide specific rule of law conditionality for the covid-19 recovery fund (“Next Generation EU”). The conclusions noted: ”Member States shall prepare national recovery and resilience plans setting out the reform and investment agenda (…) The recovery and resilience plans shall be assessed by the Commission within two months of the submission. The criteria of consistency with the country-specific recommendations, as well as strengthening the growth potential, job creation and economic and social resilience of the Member States shall need the highest score of the assessment.” As Morijn pointed out, these country-specific recommendations have included issues like stronger independence of the judiciary, for example in Poland, Hungary and Malta.

2) In her post-summit press conference, German chancellor Merkel also stated that there may be movement on the article 7 procedure on Hungary, which may point at a special deal that was made with Hungary’s prime minister Viktor Orbán. She said: “We will determine in detail what steps the Hungarian government has to do in detail to get the Article 7 process towards a vote. The initiative has to come from Hungary.” (Translation by DRI). As Germany currently holds the EU presidency, it could indeed put the article 7 process to a vote in the Council of Ministers, ending years of inaction.

Her carefully chosen words leave open how Germany would actually vote, but it suggests a scenario whereby Germany and others vote against continuing the process.[4] Such a step would be highly controversial. In its defence, it could be argued that Article 7 has no chance to succeed because its eventual sanction of suspending voting rights requires unanimity in the European Council and the Polish government made clear it would vote in favour of the Hungarian government, so why not trade it for concessions in the form of the European Council conclusions that invite a conditionality regime for budgetary matters? On the other hand, it appears impossible to reverse ten years of authoritarian engineering with a few steps (change the constitution, change media ownership, change public media staff and coverage, change election laws, hold fair election immediately, allow academic freedom, repeal NGO laws, re-staff courts, etc.).[5] Besides, if the Council of Ministers voted that there is no risk to democracy and the rule of law in Hungary, it would hand a major victory to the Fidesz government and make it more difficult for other actors like the Commission to implement budget conditionalities. On top of this, such a process would be interpreted as a dirty deal between the CDU-chancellor and the Fidesz prime minister to keep Fidesz in the European People’s Party with less frictions than currently.

3) The question of conditionality has focused on the rule of law, but the European Council conclusions have opened the language somewhat by indicating: “The Union’s financial interests shall be protected in accordance with the general principles embedded in the Union Treaties, in particular the values of Article 2 TEU.” Article 2 not only mentions the rule of law but also democracy and human rights. This may indicate that the proposed mechanism would address threats to all these values. Would this make a difference? Democracy, the rule of law and human rights are interrelated. One cannot have one without the other. The Commission has argued that democracy and human rights problems can be solved when there is rule of law – independent courts can remedy shortcomings. While that argument makes sense, some issues reside more firmly in the sphere of human rights – such as the rights of journalists and free media. Likewise, untangling authoritarian legislation may sometimes be justified by democratic will.

There are multiple pending rule of law cases before European courts against Poland and Hungary. Is the proposed conditionality going to affect those?

The pending and ongoing cases before the European Court of Justice are not likely to be affected by the conditionality regime, if it is to be introduced – the Court is an independent body and it cannot be instructed by any other EU institution to adjust its proceedings. However, the introduction of conditionality could affect the way the Commission deals with breaches of the rule of law. Insofar, it has referred cases to the Court and requested for interim measures in the most severe cases. This approach appears to be the most effective means of enforcing the rule of law in the EU up until now. If a new conditionality mechanism was to be introduced, it remains to be seen whether the Commission would continue going through the Court or would resort to conditionality as a primary means of ensuring respect for core EU values. However, affected member states could turn to the Court to challenge EU decisions in this regard.

[1] The lifting of the ceiling for own resources, proposed by the Commission, require a unanimous decision of member states that is ratified by national parliaments.

[2] Article 294 Treaty on the Functioning of the European Union.

[3] Qualified majority voting in the EU means a double majority: 55% of states must vote in favour and they have to represent at least 65% of the population.

[4] Technically speaking, the vote would be to determine if there is a “clear risk of a serious breach by a Member State of the values referred to in Article 2” (Article 7 I Treaty on European Union). If less than 4/5 of the members of the Council of Ministers voted against that motion, the process would end there.

[5] For more details, see the European Parliament`s proposal to the Council of Ministers to determine a risk to the EU’s values in Hungary.