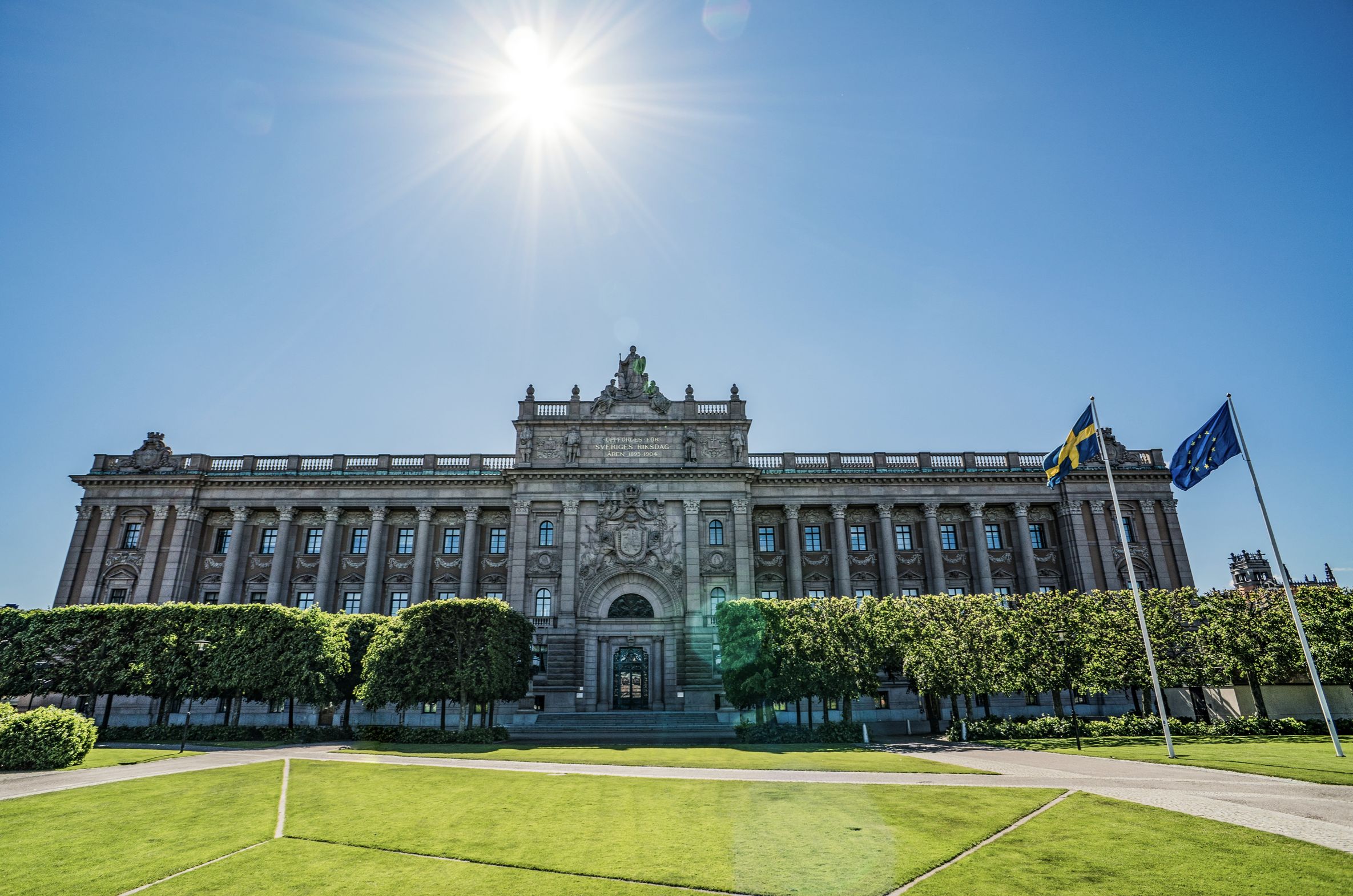 Sweden's election and the rule of law

Parliamentary elections will take place in Sweden on September 11. Political parties sorted themselves into two blocs (centre-left and centre-right) and are going neck-and-neck in the polls.

The Sweden Democrats, a party known for its anti-immigration stance and for opposing EU integration, have jumped ahead of the Moderate Party in the polls and emerged as the runner-up, just behind the Social Democrats. 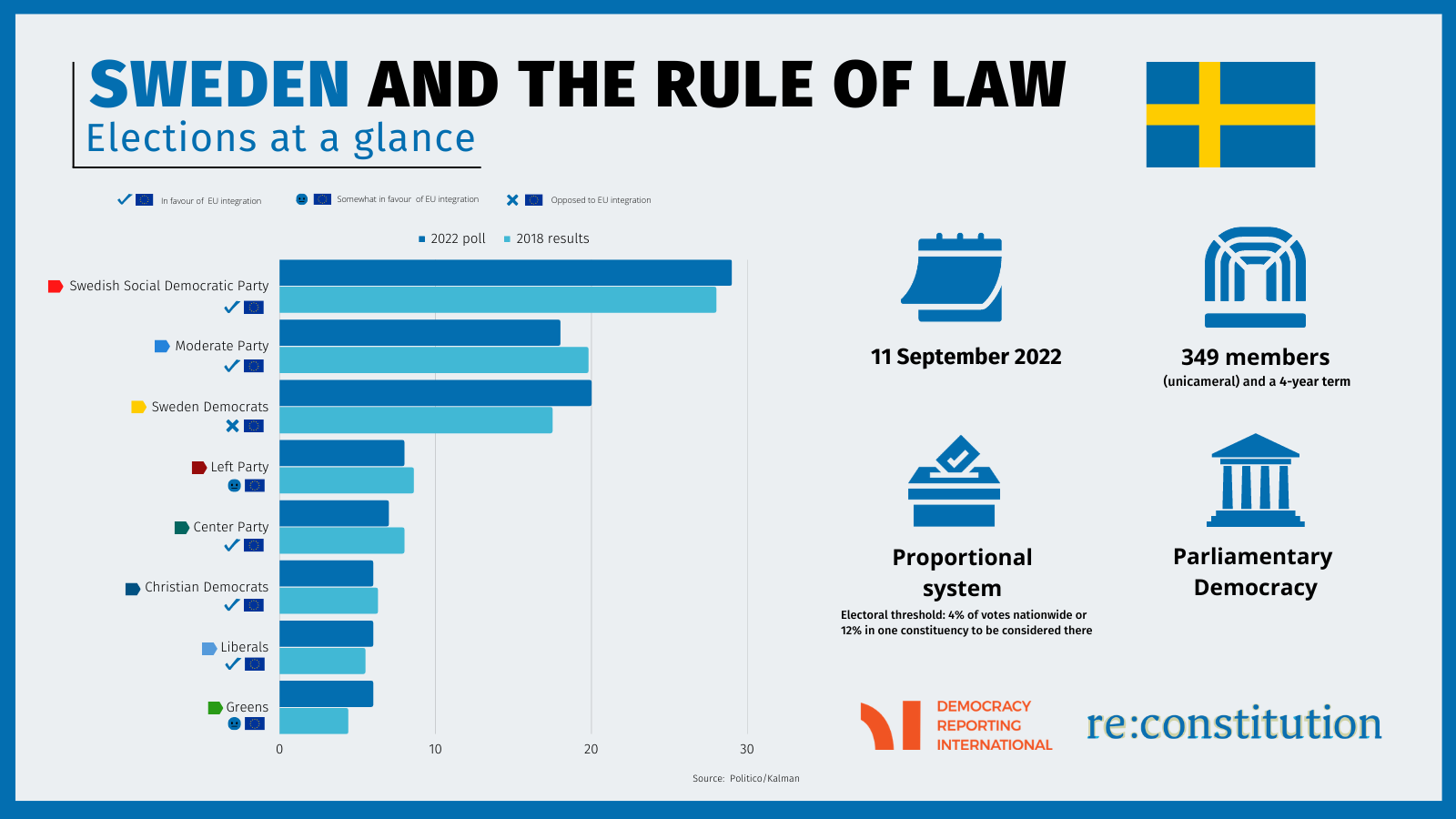 It is hard to predict what new government will come out of this election and the effects it can have on Sweden’s rule of law performance. Let’s take this opportunity to examine Sweden’s rule of law record — a country which usually fares well in this subject — and reflect on the possible risks that the current election might bring.

Various rankings list Sweden among top rule of law performers in the EU and globally.

The European Commission praised Sweden for the inclusive nature of its (judicial) reform process (the establishment of the all-party committee chaired by the Supreme Court President) and for not rushing it. It also highlighted opportunities for structured cooperation between the Government and civil society and joint problem-solving. It took note of Sweden’s strong legal framework guaranteeing media freedom and pluralism and praised its commitment to transparency when seeking to prevent corruption. As highlighted in the Commission’s 2022 Report, Sweden’s National Human Rights Institute (the body with the power to monitor and report on human rights and submit proposals on actions to be taken to the Government) became operational on 1 January 2022.

Democracy Reporting International (DRI) and the European Implementation Network (EIN) have ranked Sweden’s record of implementing the judgments of the European Court of Human Rights as “very good”. The country has only 13 % of leading judgments (those revealing systemic or structural problems and requiring general measures) pending implementation after 10 years (EU average: 37,5 %).

Rule of law Challenges in Sweden?

In the past few years, politicians and experts debating the rule of law in Sweden have revealed a concern about the risk of backsliding. There is also a perceived awareness of the need for addressing potential vulnerabilities and building resilience against such a risk. These debates appear to have been triggered by alarming developments in other EU member states. Considering these developments, some political parties and civil society organisations have called for the reinforcement of constitutional guarantees, for example, for judicial independence. The procedure for amending the Constitution is also under review to ensure continued protection of the rule of law and prevent legislative manipulations that bring about an easy capture of independent institutions. In most areas of governance, the problem lies not in the actual malfunctioning and visible abuses of power, but gaps in legislation that could be abused in the future. Sweden’s unique handling of COVID has also prompted a possible need for a constitutional amendment to deal with severe peacetime crisis.

The protection of the rule of law requires being alert, even in countries with generally excellent record in that regard, as demonstrated by recent developments in Sweden. Let’s examine the following areas of governance.

The Need for Stronger Formal Guarantees of Judicial Independence

While judicial independence does not appear to be in danger, Sweden has made efforts to identify potential vulnerabilities and strengthen guarantees of judicial independence. In February 2020, Sweden launched a parliamentary process to examine the constitutional and legislative framework related to the judiciary. An all-party Committee of Inquiry set up to identify ways of protecting the judiciary from political pressure will deliver its report in February 2023. Sweden is expected to take into account the European standards on judicial independence when implementing the change, as recommended by the European Commission in its 2022 Rule of Law Report.

Key issues within the Committee’s mandate include the retirement age and number of Supreme Court judges (the question is: should this be regulated in the Constitution to reduce the risk of the capture of the Supreme Court?) and the status and independence of the National Court Administration. The Committee will also consider the establishment of an independent Council for the Judiciary, the change advocated by the Judges’ association. A few issues that are not part of the Committee’s mandate have also been brought up. Civil Liberties Union warned the European Commission that supervision of courts and initiation of disciplinary proceedings against judges by government-appointed Chancellor of Justice could potentially endanger judicial independence. Civil society organisations also argued that independence and representativeness of the panel proposing candidates for judicial appointments to the government was to be guaranteed by constitution, not ordinary law.

According to Media Pluralism Monitor 2022 the overall state of media pluralism in Sweden can be considered as good. Sweden scored a low risk for overall political independence, even though the country report emphasised the need for regulation of conflict of interests between media owners and ruling parties or politicians. The constitutional protection of freedom of expression and relatively few violations of this freedom also led to the low-risk score. However, based on the negative experiences during Covid-19, the report warned that these guarantees may not always hold when they are put to test. Sweden scored medium risk due to the lack of legislation precluding a high degree of concentration of media ownership. The report also highlighted the lack of specific regulations on transparency of media ownership. Government has since proposed legislative amendments providing for the disclosure of more information.

Swedish civil society condemned a rejection of the proposal to include the protection of public service media in the constitution by several political parties in the parliament. Threats and intimidation of journalists, including online harassment have been reported, with little progress being made in investigating and prosecuting such threats.

Reportedly civil society organisations are often subject to violence and harassment in Sweden. Most vulnerable are those who speak out on LGBTIQ issues, followed by those expressing opinions on racism and anti-racism, feminism, religion and beliefs, children and/or young people’s rights. There is a growing concern that with the rise of far-right movements in Europe and in Sweden, civil society actors will become even more vulnerable and legislative measures might not suffice to ensure their safety.

The European Commission’s 2022 rule of law report called for strengthening the fight against foreign bribery, including through addressing shortcomings of legislation and enforcement efforts. The Commission also called for evaluating the scope, impact and implementation of the rules related to revolving doors that cover top executive functions in the government (the evaluation was launched in June 2022 and is expected to be completed by August 2023).

Rule of law in election manifestos of political parties

Political parties do not reflect on the above-listed rule of law issues in their manifestos in detail. This may be explained by the perception of these issues as less urgent or relevant for their electorate, compared to other issues such as crime, education, healthcare and immigration. Another reason may be that political parties have an opportunity to voice their views though ongoing legislative processes (see above).

The manifesto of Social Democrats expectedly makes an emphasis on Sweden’s strong tradition of standing up for democracy and respect for human rights and belief that the EU should “stand up for our common values.”

The Moderates’ manifesto explicitly affirms their commitment to the rule of law. It also emphasises the need to reinforce judicial independence. In the past years, the party advocated the creation of an independent Council for the Judiciary to be expressly included in the mandate of the all-party committee created to examine constitutional/legal framework related to judiciary. The Moderate’s political program also made an emphasis on the media freedom and pluralism, mentioning that it is important to protect public service media and strengthen protection of journalists against threats or violence.

The Sweden Democrats’ manifesto is marked by anti-immigration stance and emphasis on restricting access to welfare for non-citizens. There is also emphasis on stricter criminal policy, and deportation of foreign criminals. They also promise revoking residence permits for foreign nationals on the grounds of anti-social behaviour and tightening the rules on labour immigration.

Centre Party’s manifesto lists protection of liberal democracy among its priorities. To achieve this, they seek to make it harder to amend the constitution, strengthen independence of courts; improve the speed and quality of justice, increase transparency, tighten the rules for funding of political parties to minimise external influences. The manifesto also emphasises significance of independent media, measures against discrimination, protection of fundamental rights and use of the constitutional court to secure such protection.

Green party manifesto similarly emphasises the significance of strong democracy and the rule of law. They promise to protect Sweden’s constitution against rapid changes, support independent media and strengthen the rights of national minorities and the indigenous people.

Liberal Party promises in its Manifesto to increase independence of courts, support the establishment of constitutional court able to overturn laws that clash with constitutionally protected rights, protect abortion rights in the constitution. They also emphasise a critical role of independent media, improved funding for the civil society. They promise to fight all forms of discrimination and support migration policy that is humane and sustainable long-term.

Sweden’s rule of law performance has been positively assessed so far. Ongoing debates, however, do signal the awareness of risks of rule of law backsliding and reflection on the ways of improving the system’s resilience. The question is: Will oversight institutions be able to constrain the government and preclude policies undermining the rule of law? How adequate is constitutional/legislative framework? To what degree will the existing political landscape and political culture minimize the risks of rule of law backsliding? How resilient would Swedish judges be in response to the kind of challenges their Polish and Hungarian counterparts have faced in the past years? To what degree will courts be shielded from political influence if government continues to make decisions on judicial careers?

It is unclear whether Sweden Democrats will be part of the government and how disruptive their presence in parliament will be. One could argue, however, that irrespective of election results, the risks of rule of law backsliding are not particularly high in Sweden. Inclusive nature of reform processes and commitment to consultations as opposed to rushed adoption of laws, existence of structures of cooperation with civil society organisations and presence of free media arguably mitigates the risks. Constitutionalisation of guarantees and change in procedures for amending the constitution that are currently being considered could be a way forward in terms of making it more difficult to capture judiciary. However, mismatch between formal guarantees of judicial independence and actual practices elsewhere signal that formal change will hardly be sufficient to prevent backsliding.  Supranational courts/transnational judicial networks could be helpful external allies in countering interferences, even though Swedish judges do not see EU membership as critical for their independence, in contrast to their Spanish and Portuguese counterparts, for example.