Eight years after the revolution – Taking stock of Libya’s transformation

Libya’s developments since the 2011 revolution have been complicated and confusing. What were the important moments, what did they lead to in the long run? Who are the important players? And what can we learn from the recent past?

DRI launched a publication which connects the dots of how the country got to where it is now. Looking at the (war) economy, questions of legitimacy, power and violence along an interactive timeline, the publication serves as an online guide to find a way through the complexities of Libya’s transformation from 2011 – 2018. 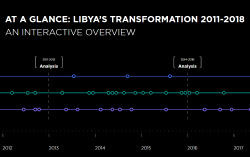 The launching of this publication on 10 June in Tunis gathered more than 35 participants, including two of the authors as well as representatives of international organisations, embassies, scholars, activists, and civil society organisations. Beyond presenting and discussing our analysis, members of the international community and Libyan scholars and activists identified current challenges and recommended ways to overcome them.

Concerns ranged from the lack of clarity of UNSMIL’s mandate, the missing respect for the rule of law in Libya, the lack of women representation in decision-making, to the shrinking space of CSOs in the East of the country, all in the context of violence and a war that was escalated once more this year.

Concretely, some participants underlined the lost credibility of the UN and international community and recommended to clarify and re-consider the UN’s mandate to a potential peacekeeping mandate.

Others stressed the need to increase the role of the Libyan judiciary system. In the past years, many political decisions were subsequently challenged in courts and overturned. Some participants felt that the courts should review principle laws or decisions on political issues like elections or the constitution before they are formally adopted, to reduce the scope for judicial challenge. Some legal systems include such mechanisms for laws of high importance (such as ‘organic laws’).

One speaker stressed that women were systematically assaulted since 2011 and yet remained resilient and worked at the forefront of protecting and restoring a sense of social cohesion, working with youth, education and ethnic minorities. Unfortunately, women have been missing around the negotiation tables. Participants called on all actors to give women a voice and a seat at the negotiation table – in particular the international players should ensure participation of women in internationally led decision-making processes.

Finally, participants discussed the lack of viability of civil society organizations in Benghazi and the East in general. International actors find it particularly difficult to reach out to Eastern organisations. Most of the activists in the East are afraid to work openly, as they are easily labeled as traitors, ‘atheists’, or spies when expressing political opinions. In order to perform any activities or even travel outside of Libya, activists need to obtain security clearance from security agencies in Benghazi. The use of virtual spaces and advocacy campaigns online were discussed as possible ways out.

The launching event was held under Chatham House Rule in the framework of the project “Strengthening Libyan Civil Society Engagement on the Constitution and the Political Transition”, funded by the German Federal Foreign Office.