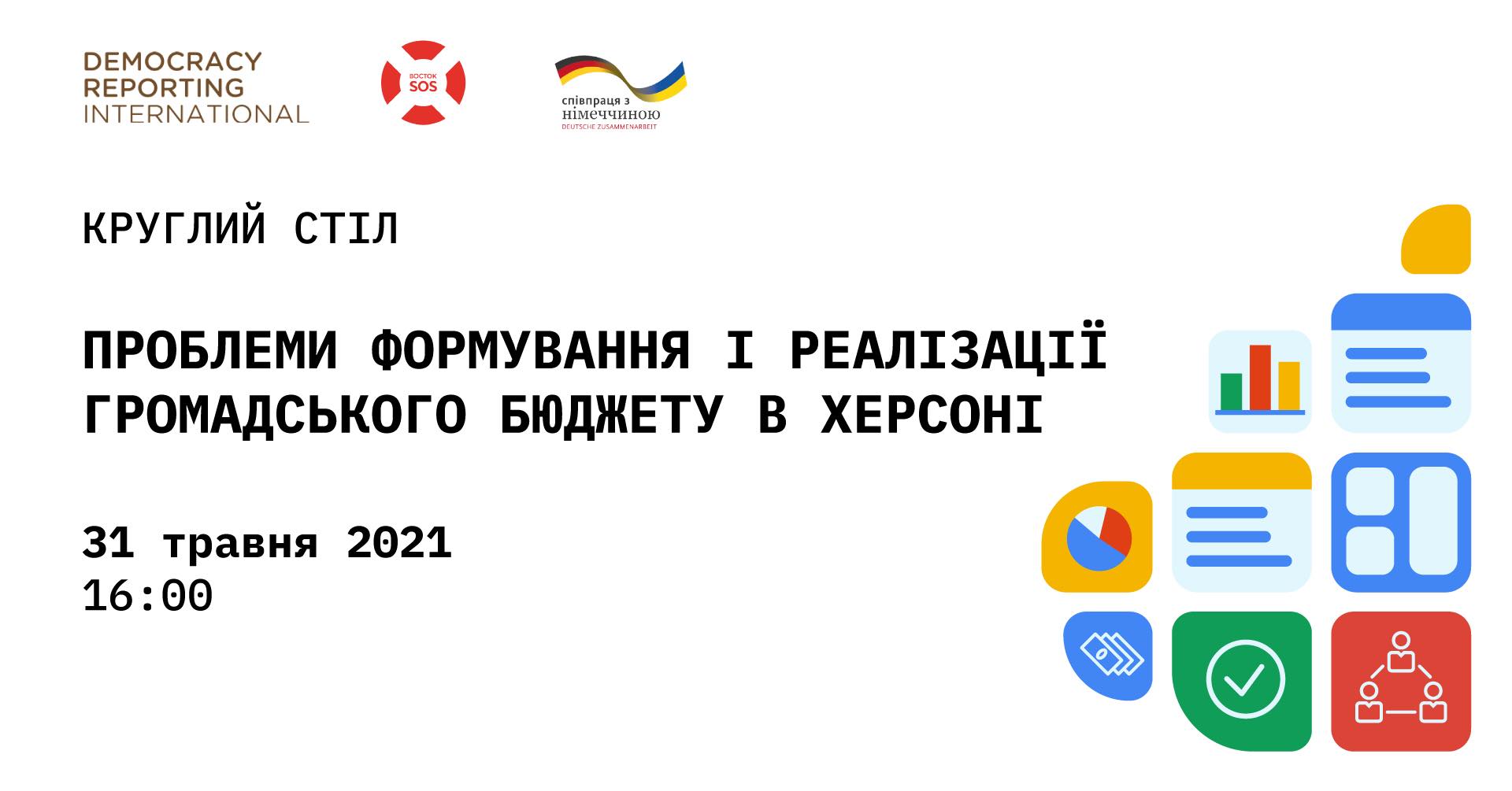 Round table: "Problems of formation and implementation of the participatory budget in Kherson"

Democracy Reporting International in cooperation with Vostok SOS held a roudtable table: "Problems of formation and implementation of the participatory budget in Kherson" which took place on May, 31, and was held online. The discussion was dedicated to problems of formation and realization of the participatory budget in Kherson.

The discussion started with an overview of the participatory budget instrument by the expert Mr. Bogdan Bernatskyi. He spoke about history of its rollout in Ukraine, and it remains one of the only mechanisms at the local level not regulated by any law, making it a completely unique bottom-up initiative.

In Ukraine, the funding available for participatory budget is around 0.28-0.4% of the total budget. The inclusion of citizens in the mechanism is around 4.42%. In Kherson, however, people are more active: 5.6% of inclusion which brings the value of one vote to 588 UAH, around 4 times lower that the country average.

The Kherson situation is quite unique because it was a purely civil society initiative to start a participatory budget. Civil society advocated and pushed for the adoption of the mechanism.

The problems characteristic for the whole country are also present in Kherson. One of the biggest issues of participatory budget is performing the functions of local government at the expense of the participatory budget, when the financing of municipal institutions is carried out through participatory budget projects. The expert suggested that the mechanism should include filters for such projects that would not allow them to get through. For instance, quotas can be introduced, for example: 50% of the projects are for the whole city, 30% are for budget institutions, and 20% are for associations of co-owners of apartment buildings. Another option is to have quotas according to city districts. Finally, criteria of innovation and inclusivity should be introduced and applied during the selection.

The next speaker Ms. Lyudmyla Absava who was among those at the beginning of the initiative, however, says that this is a problem: a purely civic initiative does not have enough ownership in the city government, therefore, leading to a set of challenges the budget faces.

Among the problems that she named were:

In the first year, the team was not expecting much, and the number of applications highly exceeded the expectations, with 77 applications. 6 projects remain unrealized with no financing. Another problem is that sometimes some projects cannot find a department that would be responsible for the implementation of the project. Also, some of the villages around Kherson that had recently been attached to the city in the process of decentralization were not able to participate. Finally, according to Lyudmyla, the number of members of the coordination committee is too high making it hard to have a quorum and adopt any decisions.

Yevgeniya Virlych who was one of the authors of projects submitted for participatory budget assessed the mechanism and the organized process as positive overall. However, she notes, some of the winning projects get lost after funds were transferred to other causes, and it is the responsibility of the authors to stand their ground to demand their projects to be reinstated in the next cycle. Yevgeniya says that key to success of the project is effective work with stakeholders, beneficiaries of the project as well as a wide promotional campaign.