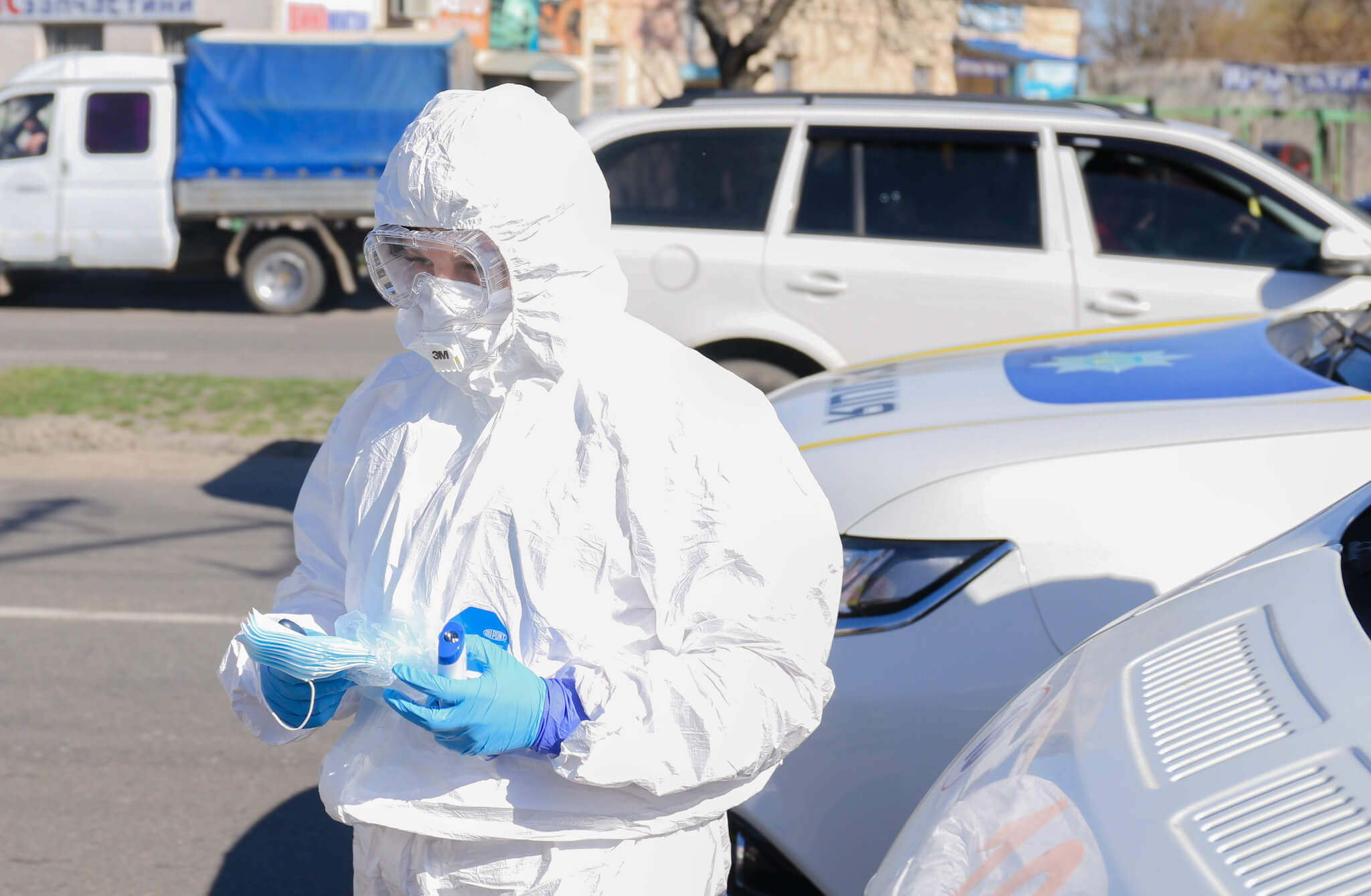 This backgrounder was written by Bohdan Bernatskyi.

The imposition of total lockdown in response to the threat of covid-19 spreading in Ukraine[1] was described in our April 2020 article for Verfassungsblog as timely, appropriate and proportionate. The Ukrainian government rejected the idea of declaring a state of emergency, although the former health minister Illia Yemets favoured it.

The legislative branch of the government continued to function, even though several MPs fell ill with covid-19. As usual, MPs voted on laws during plenary sessions held inside the parliamentary building at 5 Hrushevskoho St. As one of the most significant changes in parliamentary activities during the quarantine, meetings (e.g. hearings) began to be held online. However, there were exceptions to this practice for hearings on high priority issues, some of which were held by MPs outdoors near the Verkhovna Rada, the parliament.

MPs also passed a special law enabling courts to extend procedural deadlines for a large number of trials during the quarantine. Nevertheless, the courts continued to handle legal proceedings on a case-by-case basis, paying due regard to specific circumstances. Unexpectedly, the pandemic also expedited the launch of a system of online legal proceedings, which was supposed to be launched several years ago.

However, in our April article, we argued that it would be necessary to keep reviewing restrictive measures — and relaxing them, if circumstances permitted it — and this remains true today. While implementing anti-epidemic monitoring, Ukraine's Cabinet of Ministers changed strategy and adopted a new approach to fight the spread of covid-19. On 20 May, Ukraine’s third health minister so far this year, Maksym Stepanov, announced a plan to introduce an "adaptive quarantine". This new policy contains a number of new elements related to anti-epidemic regulation (see the table below).

Since May, the regional Commissions on Technogenic and Environmental Safety and Emergency Situations have assumed responsibility from the government for deciding whether to reduce or strengthen anti-epidemic measures in their respective regions. They review the measures implemented once a week. According to the indicators set by the Cabinet of Ministers, as of the second week of June, the city of Kyiv and six oblasts (out of a total of 24 oblasts and Crimea) were not ready to loosen the quarantine; however, de facto quarantine restrictions were slightly eased throughout Ukraine.

Are human rights under threat?

On 3 June, in his speech at the high-level conference on the response of Council of Europe member states to the new challenges posed by covid-19, Róbert Spanó, President of the European Court of Human Rights (ECHR), underlined four main principles that must be followed when taking measures to curb the spread of the virus. First, all measures restricting human rights must be strictly proportional. Secondly, these measures must meet the criteria of legality, which presume predictability and no arbitrariness. Third, rules adopted as a basis for pandemic-related measures must not afford excessive discretion to executive authorities. Finally, the mere fact of derogation from Convention commitments cannot be a ground for violating human rights.[2]

On 4 June, the Constitutional Court of Ukraine received a submission from the Supreme Court (SC) regarding the constitutionality of restrictions imposed for the duration of the quarantine as a result of regulations adopted by the Cabinet of Ministers and the parliament. The SC questioned these quarantine measures, determining that the three principles (proportionality, legality, and caution against excessive discretion) had been violated. Ukraine’s highest judicial body was thus the main opponent of the government's quarantine policy.One particular aspect of this constitutional submission of the SC calls for closer consideration. According to preliminary data, rulings by Ukrainian courts in cases involving violations of quarantine are not uniform. More than half of the administrative proceedings have been closed or returned to the police on the grounds that the misdemeanours in question were either minor or groundless. Only one person in twelve has been held liable.[3] In such circumstances, it is obvious that the constitutional submission has hardly been conditioned by the SC's need to perform analysis of case law.

The Supreme Court's position on the unconstitutionality of anti-epidemic measures

The Supreme Court's position on the unconstitutionality of regulation No. 392 is based on two separate arguments. First, the court maintains that measures restricting human rights are contrary to the country’s constitution. In support, the SC notes the following: 1) the procedure for the isolation or observation of individuals over 60 is contrary to freedom of movement and the principle of non-discrimination; 2) a ban on gatherings of more than ten people is contrary to the standards of freedom of assembly; 3) there is a lack of legal certainty; 4) the prohibition of some business activities violates the right to entrepreneurial activity; and 5) the postponement of routine medical operations is not in line with the right to health.

The SC also referred to the ECHR’s three-part test, holding that Ukraine’s covid-19 regulation does not meet the criteria of proportionality and legality. From the perspective of the armed forces, such measures can be permissible only in a state of emergency.

The SC’s second argument concerns the remuneration of judges (remuneration has been significantly reduced for all public officials in Ukraine, including for judges). The court expressed concern that lower wages could undermine guarantees of the judiciary’s independence.

The government's position on anti-epidemic measures: on the verge of legality, but within the limits of the law

Commenting on the legality of the quarantine, Ukraine’s justice minister, Denys Maliuska, drew attention to three aspects of the government’s anti-epidemic policy.[4] The first is the procedure for introducing a quarantine. According to Maliuska, the answer to the question of whether the legal procedure was violated will be heard by the District Administrative Court of Kyiv, which is considering a dozen cases related to anti-epidemic measures. Even if that court recognises that the procedure was violated, this will not automatically mean that the quarantine itself is illegal. Only “significant violations of the procedure that affected its essence can result in it being recognised as illegal”, Maliuska said.

The second aspect concerns whether the Cabinet of Ministers acted within the limits of its legal powers. Maliuska said the government went to the “very edge” of its powers. It would definitely have been illegal had it gone further.

The third aspect concerns whether the government’s actions were correct and balanced. Maliuska maintained that the restrictions on human rights were proportionate to public health needs. In support of this, he drew attention to the fact that the government had implemented restrictive measures similar to those taken in other European countries. The Ukrainian courts and the European Court of Human Rights will have the final say in deciding whether the measures were proportionate, and the government is ready to recognise and implement any court decisions.

Finally, Maliuska maintained that even if violations were found, the government’s quarantine policy would still be justified, as its key objective is to protect people’s life and health.

Anti-epidemic measures in Ukraine: are they an unjustified violation of human rights or a scenario that cannot be avoided?

Adopting the first regulation — No. 211 ‘On Preventing the Spread of Acute Respiratory Disease COVID-19 in Ukraine Caused by Coronavirus SARS-CoV-2 (the Quarantine)’ — the government referred to the Law of Ukraine ‘On Protection of the Population against Infectious Diseases’ and the decision of the State Commission on Technogenic and Environmental Safety and Emergency Situations dated 10 March 2020. The legal grounds for the adoption of the second regulation — No. 392 — are identical. During the initial phase of the pandemic, the Ukrainian government played a key role in introducing and defining key elements of the quarantine measures. In Slovenia, for example, quarantine restrictions were introduced in the same way based on a government regulation dated 12 March 2020.

Since the beginning of the “adaptive quarantine”, at the end of May, the Cabinet of Ministers has transferred the authority to strengthen or loosen quarantine restrictions to the regional Commissions on Technogenic and Environmental Safety and Emergency Situations, based on incidence rates at the local level. Such a system for determining the level of threat exists, for example, in New Zealand and the United Kingdom in the form of a five-level, colour-coded alert system.

It is also noteworthy that the Ukrainian parliament did not adopt a special covid-19 law, although some European states, which did not declare a state of emergency, have adopted such laws (for example, the Coronavirus Act 2020 in the UK and COVID-19-Massnahmengesetz in Austria). On the other hand, Ukraine's parliament introduced some pandemic-related changes in legislation covering issues such as tax exemption, budget planning, and the application of European treatment protocols and medicines.

In general, the Ukrainian anti-epidemic regulation resembles, if not duplicates, the approaches used in other EU and Council of Europe member states — and, of course, it has its own characteristics. The plan of the Cabinet of Ministers to loosen the quarantine is similar to those introduced earlier in the UK, Germany and Poland, among others. In this light, we have insufficient grounds to say that the quarantine is completely unconstitutional or illegal.

However, if the Constitutional Court or the District Administrative Court of the City of Kyiv finds irregularities with the procedure or violations of human rights standards, the government will have to review the legal framework of its anti-epidemic policy (for example, it will be necessary to adopt a special law or declare a state of emergency). This scenario might have short-term negative consequences for the strategy to curb the spread of covid-19, especially against the background of a constantly increasing number of infected people.

At any rate, the priority of the state to protect the life and health of all those within its jurisdiction, as stipulated in Articles 27 and 49 of the Constitution of Ukraine and Article 2 of the European Convention on Human Rights, remains unquestionable.

[2] Only 10 member states of the Council of Europe have declared derogations from some provisions of the Convention for the Protection of Human Rights and Fundamental Freedoms (Albania, Armenia, Estonia, Georgia, Latvia, North Macedonia, Moldova, Romania, San Marino and Serbia). See https://www.coe.int/en/web/conventions/full-list/-/conventions/webContent/62111354.

[3] "Fines are not for Everyone: How Courts Punished and Pardoned Quarantine Violators”, available at https://hromadske.radio/publications/shtrafy-ne-dlia-vsikh-iak-sudy-karaly-i-proshchaly-porushnykiv-karantynu.[4] “Maliuska about the legality of the quarantine: ‘We have gone to the very edge of our powers’”, available at https://www.radiosvoboda.org/a/news-maliuska-pro-zakonnist-karantynu/30656583.html.

Tags: Covid19
Newsletter
Be the first to know about what we are working on.