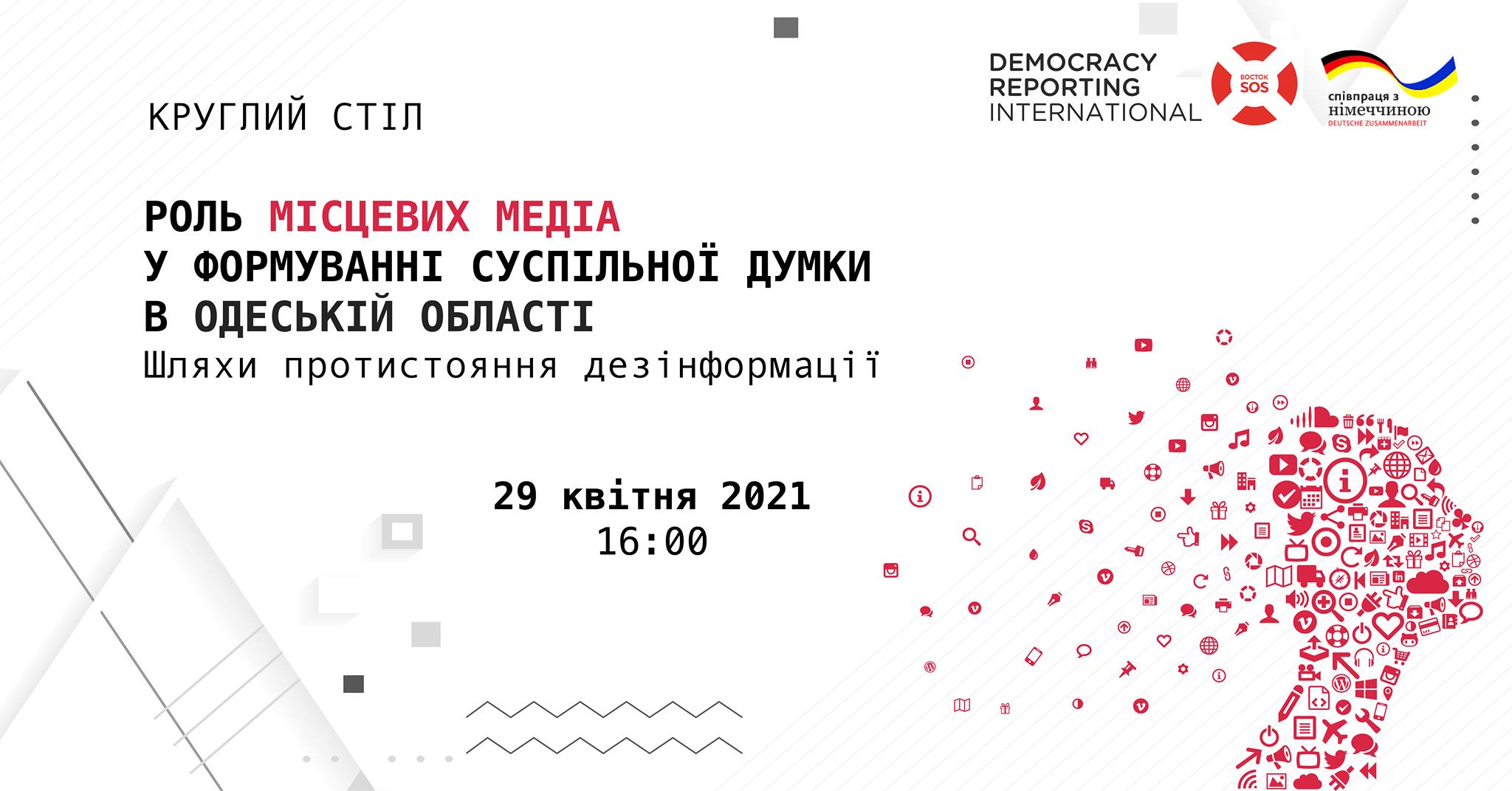 Democracy Reporting International in cooperation with Vostok SOS held a roundtable "Local media and public opinion in Odesa region: ways to confront disinformation", which took place on April 29 and was held online. The discussion was dedicated to the role of local media in shaping public opinion in the Odesa region and ways to counter misinformation.

- the main information and media trends in the region and how to respond to them,

- how to establish effective cooperation between journalists and activists in order to draw the attention of society and government to current local issue,

- how local media can remain competitive and independent.

Among participants were journalists, activists, media experts as well as students at local universities and citizens who registered through an open call.

The conversation started with an overview of current media trends in the Odesa region. Odesa region is currently leading (after Kyiv) in the number of registered TV and radio broadcasting companies. The city of Odesa alone has over 25 companies. However, currently many of them are closing, first, due to the changes in broadcasting standards (satellite) and second, because of the pandemic. Many of them are trying to react to these changes by making deals with the Internet providers directly and broadcast through them online and on smart TVs. The radio market is almost non-existent, however. Printed media have changed significantly after the law on media privatization, and many of existing newspapers were closed. To this day, around 45% of printed newspapers are closed in the Odesa region. In order to go around the law, some local governments create the so called “bulletins” or “digests” instead of newspapers with the information they control and want their residents to receive. The distribution network is also significantly reduced, and many small towns and villages do not have the means to buy newspapers anymore. In the city of Odesa, newspaper distribution is controlled by a monopolist, impeding access to the market. When it comes to online media, Odesa region is also among leaders, with the city of Odesa alone hosting over 130 online media platforms. However, they do not fall under any regulations, and therefore, lack in quality, and this is specifically true for the Odesa region. Overall, online media gather increasingly more audience than traditional media, particularly, when it comes to popular channels on the Telegram app. There is no cohesive data on the audience of regional data, but one of the recent analyses states the most popular Ukrainian regional TV channel only gets 0.7% of the audience in its region. One of the peculiarities of the region is its very long border with Moldova, where Russian TV is widespread, and these channels are picked up by people in the region, amounting to the high influence of the Russian propaganda on the region. Finally, one of biggest issues in terms of shaping public opinion is the language, with only 5% of the regional media broadcasting or writing in Ukrainian or having its homepage set to Ukrainian, despite the law requiring this. The Russian propaganda and Russian-oriented media are becoming a lot more intricate and less in-your-face, with manipulations mostly touching on people’s nostalgia and subtle cultural influences. Very often, local governments themselves become the sources of manipulations and disinformation.

Speaking about disinformation, the participants’ attention was drawn to practical instruments of dealing with manipulations that is useful for both citizens and journalists. The algorithm developed by texty.org allows to search for certain topics or articles and determine the level of their manipulativeness. The service analyzes a number of pseudo-sociologists and “trash” website that generate a lot of manipulative content and traces the topics and articles to them. Since there were participants from popular regional media present which were identified as “manipulative”, there was a lively discussion on what constitutes a manipulation. The participants noted that while these instruments are very useful, anti-fake projects like this should rely more on regional experts that would strengthen the validity of this data when it comes to regional particularities. One of the participants also mentioned the growing importance of the development of artificial intelligence technologies to counteract propaganda and disinformation.

Talking about drawing the media’s attention to the important local issues raised by activists and civil society, there were some grievances discussed, one of them is the fact that most Odesa media platforms are owned in a non-transparent manner, often by the persons who are responsible for illegal acts subject to civic oversight.

Finally, the participants were able to learn about a program available for journalists and regional media that works as an accelerator to make regional media independent and self-sufficient. Regional Champions Accelerator aims to provide regional editors and CEOs with professional skills in entrepreneurship and the implementation of business projects to improve financial sustainability and reduce their vulnerability to oligarchic and political influence, establish business processes in editorial offices to ensure effective work, and create regional media champions as exemplary independent media with a modern differentiated business model to be celebrated and emulated.

- Valery Bolgan, Editor-in-Chief of IzbirCom (the main information trends in the region and how to respond to them)

- Vitaliy Ustymenko, activist (how to establish effective cooperation between journalists and activists in order to draw the attention of society and government to current local issues)

- Yevhenia Oliynyk, expert of the Media Development Foundation (how local media can remain competitive and independent)

You can watch the roundtable here - https://bit.ly/3r13AMx